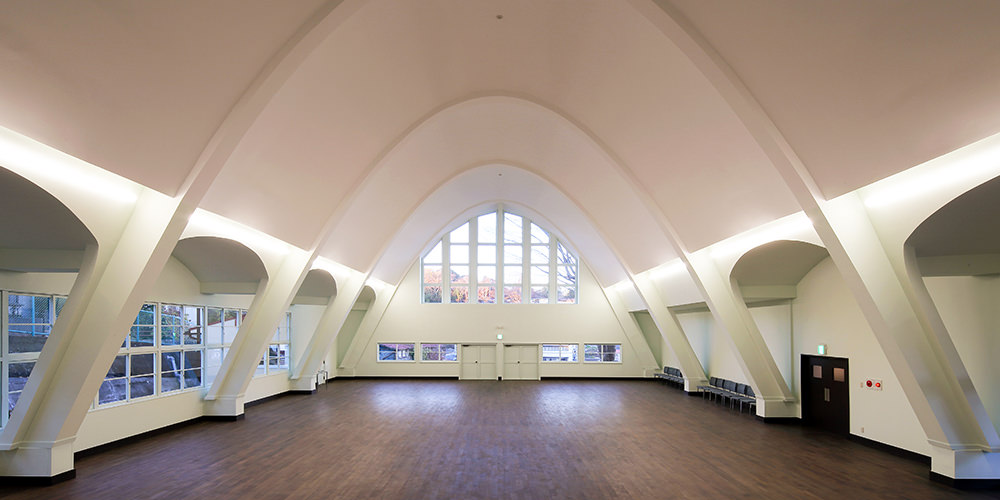 The Shiogama Sugimura Jun Museum of Art opened to the public in November 2014, following the renovation of the Motomachi branch of the Shiogama City Community Center. The location has served as a community space since 1950, creating opportunities for many people to connect over the years. The building has a beautiful auditorium with a 9.7m tall laminated timber frame. The exterior facade is also made of locally-sourced Shiogama stone, contributing to its value as a designated cultural asset.

The space doubles as a museum and a community center, and has engaged locals by hosting cultural activities for decades. It also serves to commemorate the accomplishments and preserve the history and memory of the people of Shiogama.

In order to maximize the museum’s architectural and cultural value, we provide an accessible space to foster creativity and openness through various art related programs. These include special exhibitions, music events and workshops for local youth and adults.

Visitors to Shiogama’s Sugimura Jun Museum of Art step into the world of oil painter Jun Sugimura, whose meticulous eye for detail won him great respect as a still life artist. Sugimura settled in Shiogama shortly after WWII and produced a large body of work. His connection to the port town is reflected in his paintings, which depict freshly caught fish and other maritime motifs. The gallery’s permanent collection presents a variety of still lives as well as “Portrait of the Woman,” for which he was recognized at the inaugural Kahoku Art Exhibition (formerly Tohoku Art Exhibition). Come experience the timeless beauty of Sugimura’s style, which lends weight and dignity to everyday objects.

From the North: Sugimura’s Connections to Tohoku

Jun Sugimura was born in 1907 as the youngest of nine children in present-day Shinjuku Ward, Tokyo. He moved to Shiogama City, Miyagi Prefecture in 1946, just after after the Second World War. He settled there until 1965.

Sugimura has many links to Japan’s Tohoku region. For instance, his parents were from Tsuruoka City in Yamagata Prefecture. In addition, his oldest sister got married and moved to the capital of Miyagi Prefecture, Sendai City.

Upon moving to the port city of Shiogama, he crafted numerous oil paintings which capture its suburban scenery as well as vivid images of freshly caught fish. His meticulous eye for details won him great admiration by many as a still life painter.

Under Exposure: On Achieving Recognition

In 1927, he was enrolled in the Program for Western Painting at what is now known as the Tokyo University of the Arts (formerly the Tokyo School of Fine Arts).

Sugimura studied painting under the guidance of Okada Saburōsuke, a faculty member of the university’s now defunct-Imperial Academy of Fine Arts (Teikoku Bijutsuin), and the first recipient of Japan’s Order of Culture (Bunka Kunsho), the highest public honor for arts and culture in Japan.

Pan to Boshi (Bread and Hat), one of the paintings he made as a student. In 1930, his work was accepted for display at the 11th Japan Imperial Art Exhibition (known as Teiten). His work – at the age of 23 at that time – caught the public’s attention for his exceptional painting skills and talent. From that time, his future work was something that the many kept an eye out for.

Since 1933, his works were showcased at the inaugural Tohoku Art Exhibition (now known as the Kahoku Art Exhibition) by the Kahoku Shimpo, the Tohoku region’s newspaper of record. His works have won the top honor, the Best Kahoku Prize, for two years straight. First for his painting called Fujin-zo (Portrait of the Woman), and for another work of his, called Mishin (Sewing Machine), in the following year.

Life in Shiogama: Starting Fresh in a Suburban Port Town

In the 1940s, Sugimura lost many things. He lost his house, his atelier and almost all of his original works in the Second World War. He even lost his lamp collection in a fire soon after.

For safety, he moved to Sendai from Tokyo in 1945. The next year, he then moved to Shiogama thanks to the help of his in-law relatives – his wife’s family – who were already living there. As soon as he settled his home in front of the fish market, he drew enormous inspiration from his lively surroundings that this city had to offer.

Here were some of Sugimura’s observations and thoughts about his return to Tohoku, from the book “Kuro e no Shusoku”, a book that talks about the collection of works he has created. It was published by the Kahoku Shimpo newspaper in 1994. This anecdote explains why he decided to live in Shiogama over Tokyo.

“I often received letters from my teacher, Kazutaka Nakano (a known oil painter). At that time, he had returned Tokyo from Gunma (Prefecture), where he escaped to evacuate for safety (in the war).

In his letter, he encouraged me to come back to Tokyo.

He said, ‘What is taken you so long in the countryside? You should come back to Tokyo as soon as possible, otherwise you will be left alone in the Japanese art world!’

But I had already made up my mind and decided not to return to Tokyo. Instead, to settle down in the countryside and study harder here. I thought it was far better for me to concentrate on studying in a calm and relaxing place than rushing around in the hustle and bustle of Tokyo.

There were a lot of things to paint here in Shiogama. Especially the freshly caught fish. They could be the excellent motifs because all of these things were seldom found in Tokyo.”

Living in Shiogama, had a significant influence on his works. One instance is that he would always use the color black as a base color for his oil paintings.

Outside painting, he was also a judge for the inaugural Shiogama Art Exhibition in 1947. He also taught oil painting classes to the public at local community centers, too. Many of these works were seen as contributions to the growth and development of Shiogama’s cultural scene that his extensive efforts were recognized by the City of Shiogama.

He was given the honored designation as a resident of cultural merit by Shiogama City in 1961.

From Showa to Heisei: Walking through Sugimura’s Final Days

Beginning in 1965, Sugimura moved back to Sendai and began to teach at several schools such as Tohoku University and the Miyagi University of Education. In 1970, he served as an administrative member, and later on from 1970, as a councillor for the Japan Fine Arts Exhibition (or Nitten). His contributions in the Nitten were known for promoting art and culture through establishing, supporting, and managing various art groups.

Even as he turned 80, he never lost his passion and desire to pursue the “presence and absence” of objects. Part of his continued passion came with the support of his wife, Sakuko Sugimura.

Without Sakuko, Jun couldn’t experience a fulfilling and fruitful life being an oil painter. Her simple yet sincere comments helped Jun decide what kind of exhibitions he can do, with such simple yet encouraging words such as “This work is great! I like it”.

After her death in 2000, he started to make earnest efforts to finish his works, which his wife had left comments “Improvement needed”. It took him one year to complete the group of works.

Sugimura faced his works with enthusiasm and pursued his theme of countryside and city life which never changed from his beginning all the way to the end until the age of 93, when he passed away in 2001.

By looking, learning, and understanding each oil painting he has made, you can feel and experience the way he grew up and lived his life from the way he channels his emotions through the intensity of the way he uses the color black in every brushstroke.

In 2014, the City of Shiogama opened this museum in his name to recognize his efforts and contributions to this city.

September 7, 1907
– Born youngest of nine children to father Masakane and mother Kiyoi Sugimura in Tokyo – Father ran a hospital and both parents were born in Tsuruoka City, Yamagata

1951 (age 44)
– Became an instructor of Faculty of Education at Tohoku University, promoted to assistant professor in 1952